OKEB Hearing and Meeting of Creditors Calendars Now Available on smartphones and tablets.

OKEB Hearing and Meeting of Creditors Calendars Now Available on smartphones and tablets.

The United States Bankruptcy Court for the Eastern District of Oklahoma is delighted to announce the expansion of service to the Bar and Public with a free mobile app called ChapMobile.  This app offers access to bankruptcy court hearing and meeting of creditors calendar data using iOS and Android devices making this information viewable anytime, anywhere.  For attorneys and trustees, ChapMobile gives these users the ability to view not only an entire day’s calendar, but also just those matters specific to them.

Click the ChapMobile App image here and also located on our Home Page, for more information. 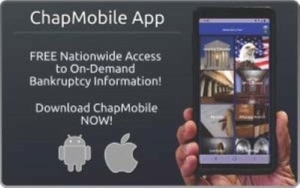 We are pleased to announce that the Free Public Calendar App, ChapMobile, is now available for download from the Apple App Store and from Google Play.

Download the App to your phone or tablet or for the following devices:

Note: The app was developed by the Utah Bankruptcy Court (which is listed in the app’s name) and is designed to work with participating bankruptcy courts, such as the Eastern District of Oklahoma.

Click here for more information on our ChapMobile Page.

For News Announcements older than five years, you can use the search feature.